Warning: setcookie() expects parameter 3 to be integer, array given in /home/vidinova/www/root/wp-content/plugins/uncode-privacy/includes/class-uncode-toolkit-privacy-public.php on line 99
 The New Decó: Project for The Bathroom Contest 2019 by Ideal Standard® - Nikoleta Vidinova - Interior Design I Graphic Design /

The New Decó: Project for The Bathroom Contest 2019 by Ideal Standard®

The unspoken name of the style New Deco appeared as a connection between the styles divided by a century.
In the second decade of the 21st century we refer to the same decade from the 20th century and the touching points are impressive. Their combination produces eclectic and inspiring burst.
The sense of aristocratic old city building is visible through the conserved original floorings, elegantly marking the two conceptual zones.
The ceilings are framed with classical moldings and contemporary hidden lighting underlining them. The lovely Mineral Blue color comes down to cut the space into two – the lower part being light and decoratively vintage, the upper part being deep, matte, mystic and contemporary.
The key zones are vertically marked in romantic Pale Blush color tiles. The small size of the tile being typical of the 20s of the 20th century, whereas its color is a top trend from the past few years.
Chrome, copper, soft white porcelain elements and tiles, light textile in curtains and soft lights complement the color areas. Rounded edges everywhere make the whole atmosphere comfortable and fluid.
The functional zones are decided intuitively. In the middle of the room stands a very useful wall which gave meaning to its two sides. Its front side welcomes the visitor with a double wash basin and mirrors, and at its back side bears a shower area, accessible from two sides. The third side is separated from the rest of the room with a glass panel. On the right there is a comfortable wc-zone with bidet and even an accent on contemporary art. In the most distant area, next to the window there is a bathtub looking out to the city. It may convert in a secluded place just by pulling the curtains. All of the functional zones are distributed regarding their order and frequency of use. Firstly there is the wash-basin, then comes the wc-zone, after it is the shower and at the end there stands the bathtub.
The timeless Ideal Standard’s Tonic II Collection provides products that match the most luxurious needs in a family bathroom. 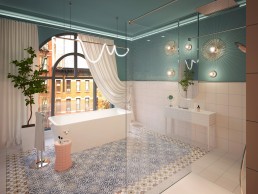 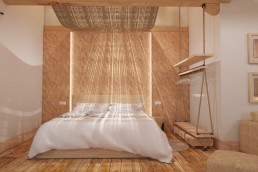 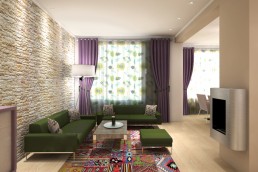 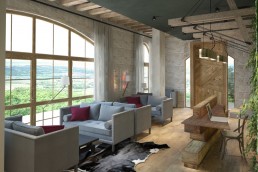